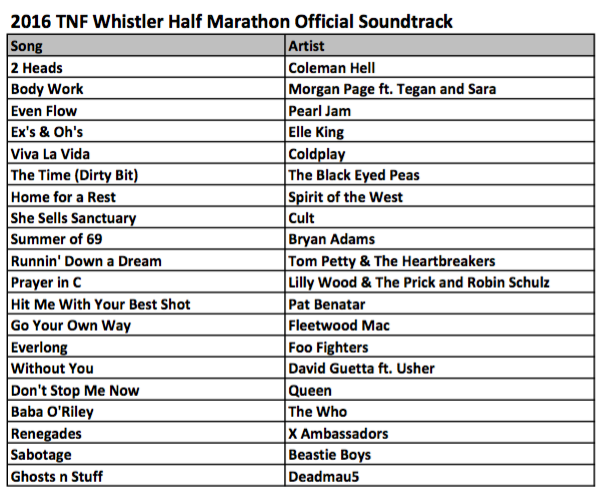 How the contest works:
*  Tuesday will be the beginning of each new contest week (New Music  Tuesday!).
*  We will post on facebook and twitter a call for new songs.
*  Anyone,  anywhere can play and win!
*  Make your song entry for that week by  commenting on the WHM facebook posting which calls for that week's  submissions.  Or on Twitter - post your favorite running songs and tag us in the post @whistlerhalf.
*  Each Monday one song will be chosen as the song of the week, from the previous week's submissions via facebook or twitter.
*  Each week the  person who submitted the chosen song of the week will win a prize and be  informed via facebook or twitter.
*  Each song that is chosen as the song of the week will be included in the official  soundtrack.
NOTE:  We are looking for an ALL NEW soundtrack for 2016 - so we will choose only songs that were not on previous soundtracks - check out them out  here: 2011 , 2012 , 2013, 2014, 2015
* The remainder of the soundtrack will be compiled using an online voting system after the contest closes - allowing you to have even more input into the official soundtrack.
* Once the voting period is closed, the official soundtrack will be compiled and displayed at the top of this page.
* Vote often for your best chance to win and hear your favorite running songs on The North Face Whistler Half Marathon Official Soundtrack